The #ds106 Daily Create for December 24, 2019 was: Dress your pet up as royalty. Here is my cat Marco dressed as King Henry II. 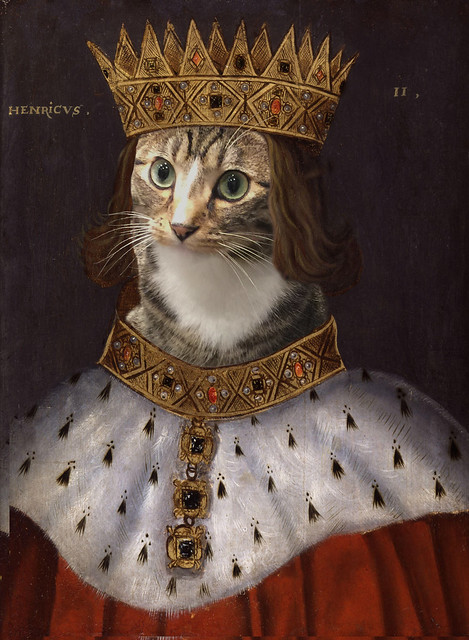 I used an image of a painting of Henry II from Wikimedia Commons, and this picture of my cat Marco: I used GIMP to create this image (version 2.8.18, which seemed kinda buggy, and I just now saw that I’m behind a couple of versions!).

I started by importing both images into GIMP as layers, and then I had to scale each layer up or down to make the cat’s face fit approximately into the space in the painting where King Henry II’s face was. As you can see, it didn’t fully work, because basically the robe is around Marco’s legs rather than his shoulders. But this is where I ended up landing.

Then, after some aligning and cropping, I added an alpha channel to the painting image and started using the eraser tool to let the cat image underneath come through. The tricky part was the whiskers, which I had to do one by one on the crappy little trackpad on my laptop, which is not conducive to drawing straight lines nicely.

I also ended up doing some erasing, and then realizing I wanted to resize the cat image more, and so then the erasing didn’t fit anymore, and then I had to start over (the above is about the fourth version or so). I think layer masks might have been my friend instead but honestly, it’s been so many years since I’ve used them that I can’t remember how to do so (and it was late last night when I was doing this and I decided not to try to re-learn at that point).

When I had the erasing looking pretty good I got this image:

The robe was sitting too far below his shoulders and I didn’t like the way it looked. But the erasing was already done and I wasn’t going to do yet another version.

So I imported the original painting into the image on a new layer, and erased everything above the collar. Then I moved that layer up, effectively moving the collar and robe up on the image. It still looks like it’s sitting a bit low on him in the final version (top of this post), but I think it’s better.

I kept thinking that it was possible to do a selection on an image and copy the selection to a new layer (rather than adding a new layer and erasing everything around what I wanted), but again, I couldn’t remember at the time. Of course, all I needed to do was a web search to find the answer, and yes it’s possible, as this post from Logos by Nick shows.

Now to download GIMP 2.10 and see what has changed!