Draw your path on a map. Stop being a slave to GPS trackers! Get out a real map (or even a digitized on), find yourself, and show us where you traveled today.

I really don’t want to put any information about my daily whereabouts on a map, unless it’s just my work–that information is public. But anything that reveals where I live, or what parts of town I tend to frequent…I’d rather that not be readily available online, for safety reasons.

So instead I drew a kind of emotional map of today, on a background of mountains and water because that’s what I’m surrounded by here in Vancouver. The mountains go right down into the water. Sea-to-sky they call it here. And this background seemed to fit the shape of the movement of my moods today. 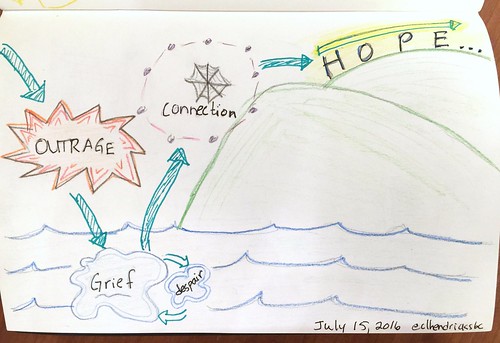 Today was difficult. I spent a good deal of time last night looking at the news about the attack on Bastille Day in Nice, and today I started off this morning still feeling awful and outraged. At a certain point I just crumpled in a heap in my office, unable to do any work. For some reason this particular attack hit me hard. Maybe it was because it had been a family holiday with kids–something I and my family do all the time. Maybe it was just on top of everything else in the past few months. I don’t know, but I really couldn’t take it. There were brief moments of despair in there.

Then I started doing some connections/collaborations with people in #clmooc, and I started to feel better. Something about joining with others to create something gave me a renewed sense of hope and I was able to face the day. That’s something I’ve experienced many times in ds106, and I thought it might work for this otherwise very difficult day. It did.

Here’s a blog post about how connecting and making things helped me through.

So when it came time to think about a map of today, an emotional map was the first thing that came to mind…

And I’ve been playing around with actual pencil and paper drawing lately, just because I’ve mostly been doing so much digitally that I wanted a change for a little bit. And I want to get better at drawing. I keep thinking “I can’t draw,” and though that, like so much of what I thought I “couldn’t” do before #ds106, is bullshit, it’s also true that I’ll only get better with practice. Here’s some practice.